The subtitle of this post is “The Interconnections of Hamilton’s Trails “. I walked about 13K with my group this recent weekend, and we went through the most varied of terrain and scenery, and above all, we remained relatively close to the city without feeling its presence; well, for the most part.

This section of the trail passed through a wooded section, which then opened up to the view of the city of Hamilton. On the other side, the trail offered the rugged rock face of the escarpment. 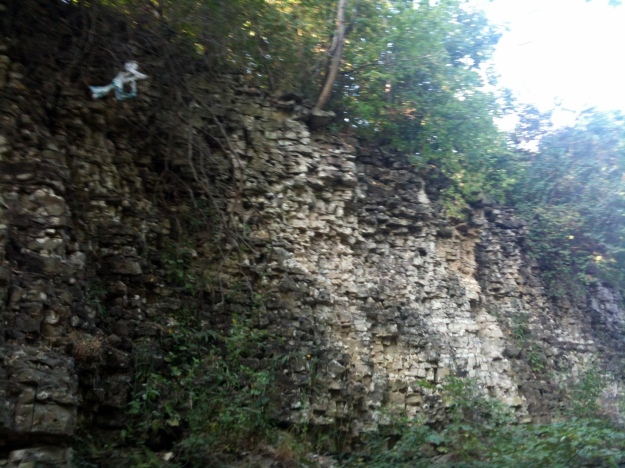 We walked on the new Bailey Bridge at Chekode Fall, now  longer, wider and stronger to withstand the eroding of the escarpment and the instability of the water course it crossed. This bridge was opened in January, 2012. 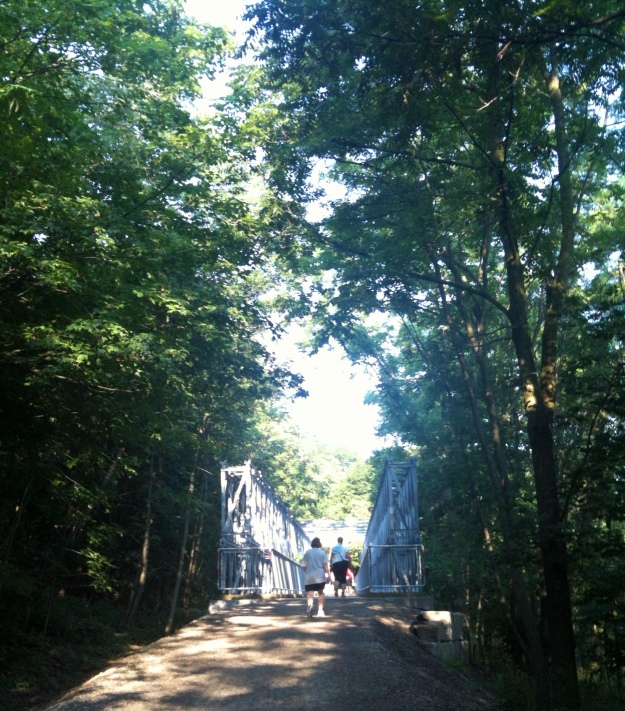 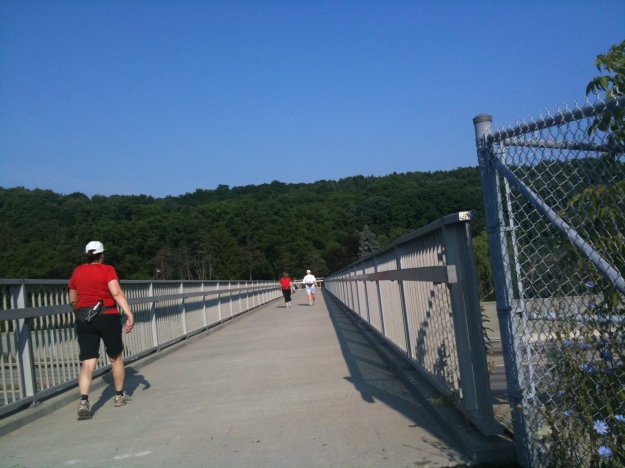 This probably was the least attractive part of the trail which paralleled the highway alongside its noise barrier.

The main Bruce Trail then led to the Filman Side Trail, which offered a more hllly and rugged terrain until it came out onto Wilson Street.

We walked along Wilson Street (which joined Main Street) and took a flight of stairs to the the Hamilton-Brantford Rail Trail. 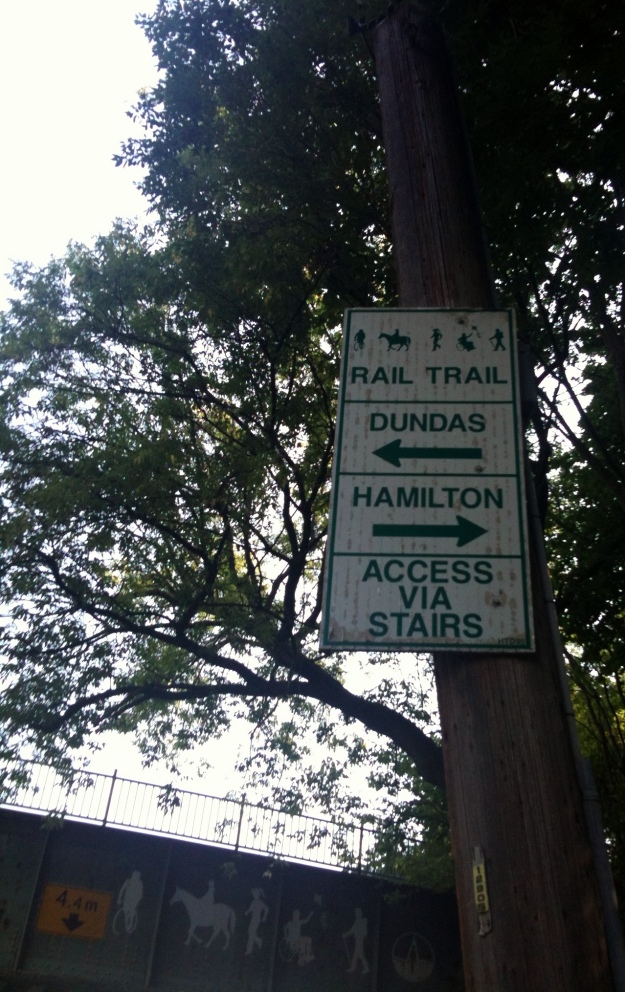 From here, we headed towards Hamilton using the Ewen Road entrance.  We continued on the new extension of the Rail Trail. This was a 2.25 K  paved trail which passed the rail yard and ending at the residential area bordering the Chekdoke Golf Course. It was opened in 2011 and formed part of the Canadian Pacific Link.

We rejoined the road where we walked uphill to the golf course earlier and headed back to Westdale, our usual starting point. When I downloaded my walking data from my Garmin, I realized that we had completed an amazing loop by connecting several trails that ran through the city!

The Trail Centre of the Dundas Valley Conservation is located about 5.5K from the Ewen Road entrance of the Hamilton-Brantford Rail Trail.

This is the former depot, with the sign Sulphur Spring  still up. At this point, there is a choice of continuing on the Rail Trail or turn into the Bruce Trail by following the white blazer. 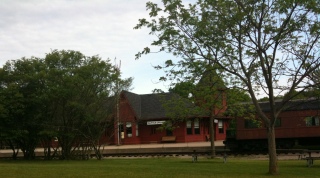 At the entrance of the Bruce Trail, a plague reads, “May the joy of nature inspires your directions in life.”

One can also go behind the Trail Centre and enter the Spring Creek Trail. 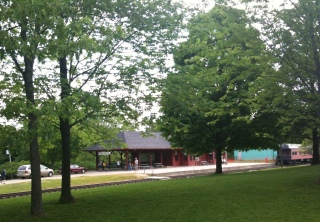 The terrain of the Spring Creek Trail is more hilly than the Rail Trail. It is unpaved, and many sections have tree roots exposed. No wonder this morning I met some hikers walking with their sticks. 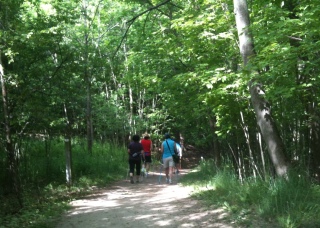 As the day became warmer, our walking group chose Spring Creek Trail for our return lag, because it was also shadier than the Rail Trail. We came off Sanctuary Park, with its playground, about 3K from the Rail Trail entrance.

My nature pic for this walk was a sea of fern.

I was introduced to the Hamilton-Brantford Rail Trail by a group of walking buddies who walk with me on Saturday mornings.

The trail begins from Ewen Road, off Main Street West in Hamilton. Although the sign at the entrance is almost covered by the foliage this season, the rider on horseback is still visible–yes, this trail is open to horseback riding. Don’t be surprised, therefore, when you encounter the excrement of horses in the country section of the trail. Better still, train your discerning eyes for hoof marks. I am still waiting for the occasion to share the trail with a horse and its rider. The trail is surfaced with stone dust, hence bike friendly. I have never seen anyone on roller blades, isn’t this nice?

The trail I have walked so far have distance marking every kilometre. Between the 5K and 6K mark, already in the grounds of the Dundas Valley Conservation Area, you’ll see the old railway track and a rail engine. Fill your water bottle or use the washroom NOW. If you miss this facility, you have to use only what nature can offer.

In the section close to the city, there are signs indicating the intersection with the main road. I never feel lost.

My most recent visit to the Rail Trail was for a casual walk. My mind was not on my workout. I allowed myself to bathe in the shade,  pause to savour the colours of the wild flowers,

and study this curiosity piece–half a grapefruit cleverly balanced on a branch to feed the birds. Mind and body are relaxed. 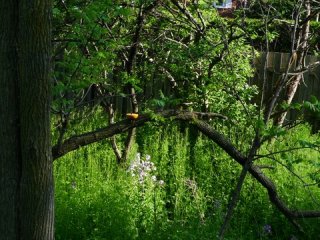 I have walked different sections of the trail, but have yet to complete the entire distance. Even though a motto of mine is “Never say never”, it is unlikely that I shall ever walk the Trail out and back, from Hamilton to Brantford and return. This will be an Ultra distance of 65 K. However, with proper planning, I may still be able to complete this trail in sections, or walk the entire trail one way.