Chef David Chang opened his three Momofuko restaurants (The Noodle Bar, Daisho and Shoto) in Toronto last Fall to raving reviews. My family and I had an occasion to celebrate and we picked Daisho to be the venue for our gourmet adventure. It was situated on the third floor and we chose to walk up the stairs by going through the Noodle Bar and caught a glimpse of the kitchen before entering the restaurant. 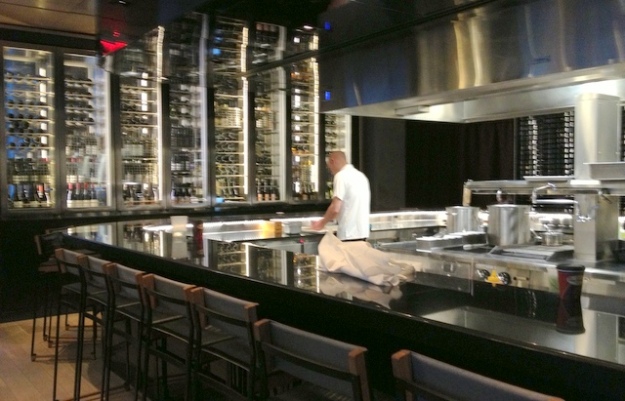 The glass windows extended from floor to ceiling providing an unobstructed view of University Avenue. There were patrons already occupying the window seats and I did not want to intrude their privacy to take my own photo of the street view. Hence I have used and I acknowledge the photo from the Globe and Mail below.

From where I sat, a spacious bar area and a well-lit wine cabinet separated the dining area from the kitchen. The decor was simple, refreshing and modern.

The menu breathed fusion. Japanese Kanji (Chinese characters) were the headings of the dishes, which were in English. Our knowledge of Chinese helped us understand the conceptualization of the menu planning with a bit of imagination. When my daughter made the reservation, she already pre-ordered a porchetta for our party of five under the category called “Kung Fu Dishes”, which could be interpreted as the “Strength or Power of the House”. Depending on the size of the party, Diasho recommended a main dish to be shared, family style.

First arrived the tongs and then the pickles, several bowls of sauces and mustard (apple, Saskatoon berries, and honey) and the warm white buns. We were eager to start when the succulent aromatic pork arrived. 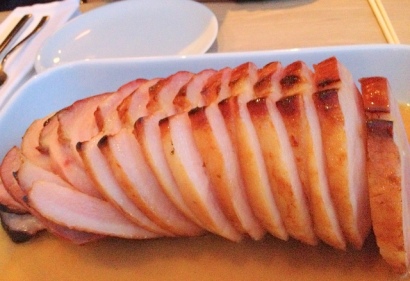 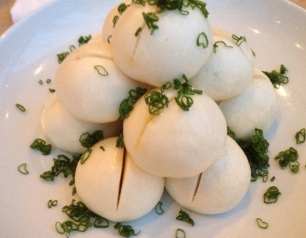 The pork was flavourful. The rind, the fatty ring and the meat offered variations in texture and taste.  The hint of sweetness in the bun cut into the saltness of the meat and balanced the fat. We all went for more helpings.

To complement the porchetta, we ordered under Winter the black salsify (a root vegetable) with white cocoa, steelhead roe and grains of paradise. This was an ingenious invention that wakened the taste buds.

For Carbohydates, the black rice juk came with bone marrow, an egg and diced celery. “Juk” sounded like “congee”  in Chinese, but this “juk’ had a stickier consistency; interesting all the same. 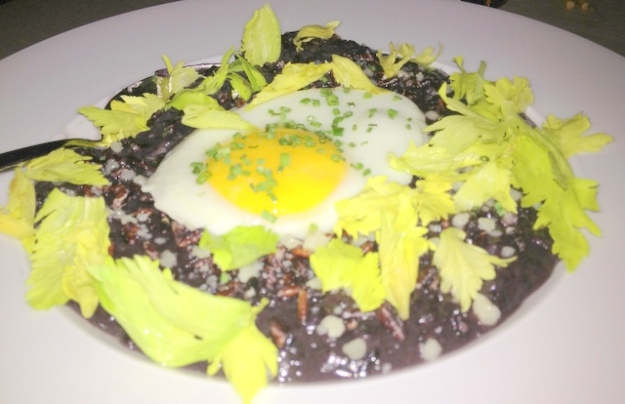 We also tried the hanger steak which came under Lettuce Wrap. It was a self-explanatory in dish that the steak was eaten wrapped in lettuce together with kimchi and onion.

We were quite full by now, but it was decision well-made to order the Chocolate-Five different textures for dessert. It was a quintessential display of culinary craft from taste, texture to plating.

Given our positive experience at Daisho, I will look for an opportunity to try The Noodle Bar and Shoto.